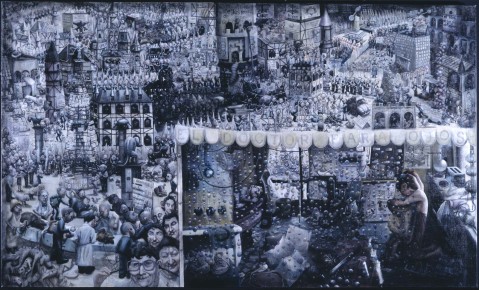 After the war in Argentina the infamous Nazi doctor Joseph Mengele is fast asleep in his caravan. He wanted to develop his research about identical twins in his lounge room, kitchen, and bathroom of the caravan that he shared with his maid/lover and her daughter. His patients’ eyes all come from the same gene pool; therefore, they see the world and themselves in a common way. Dog shows – big in Germany at the time – now take off in Argentina, as a way for people to differentiate themselves from one another. Most people try to develop their only remaining physical differences. People try to grow the world’s longest fingernails or nose hair, the world’s strongest beard or stretchiest ear. Ironically in Mengele’s eugenic paradise people walk the streets proudly displaying their intentional deformities cultivated to achieve a sense of individuality and self esteem. People look for skills that would set them apart from the Mengeleian Argentineans, like growing the world’s largest vegetables, taking the world’s longest bath, building the world’s smallest ladder, or the world’s longest backwards walk. The Guinness Book of World Records becomes the most important institution in Argentina. Scoreboards are more common than traffic lights, and unofficial world record attempts (like the longest tooth brushing) are on every street corner – until the Guinness police (wearing uniforms and armbands) move them on.

Because everyone sees things the same way, it is impossible to lie, so there is no art, no movies, and no books. Thus, the Guinness Book of World Records is able to store their records in abandoned art galleries, theaters, libraries, courtrooms, and hospitals. The lack of diversity means that there are no longer schoolyard bullies to take children’s lunch money, chase them, and fight them, so children become fat and lazy. Men can only apply for the one job, so most are unemployed, sitting on park benches, and feeding pigeons – which become fat and aggressive.

The misery of his lover’s daughter is inescapable even in her own home; scientific equipment share power points with the household items. Her discarded netball gear lies on the floor while her school friends are selecting their teams through the window. Her step-father’s world of judgement and evaluation exists inside and out.

When people share the same personality type, individual idiosyncrasies are elevated to the status of pop culture and are celebrated with mass rallies, like spoon collecting, bucket types, and playing with the Rubik cube. On this day a crowd has gathered for a bucket signing by the world famous bucket maker, Gabriel Battistuta.