Ronald Feldman Gallery will exhibit a series of figurative paintings by the Australian artist, Cameron Hayes, for his fourth exhibition at the gallery. The paintings evoke the phantasmagoric worlds of Bruegel, but his scenes address the contemporary world. The paintings, some as large as 6’ x 8’, are visually complex, depicting groups of manic figures in absurd scenarios. Hayes’ vision of the human condition is comic and bleak, yet laced with poignance. The detailed paintings reward a close reading.

Join Cameron who will be in New York to attend the exhibition reception.

Martina Navratilova’s dad left her family when she was three and committed suicide when she was eight. Her first coach was her stepfather. She grew up in communist Prague where even if you had a father he was horribly emasculated by the government system. In her mid teens, Navratilova took her complicated psychology to the women’s tennis tour of the late ’70s where players were given mops and aprons for winning tournaments.

Chris Evert’s dad was a tennis coach. As the women’s tennis tour grew, it became clear that women playing for money and fame could not compete against an opponent playing for her father’s love.

Elmyr de Hory, Fernand Legros and Real Lessard in the Republic of Poyais in 1969 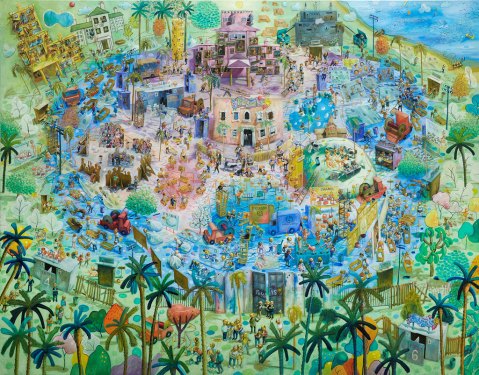 Elmyr de Hory was a prolific art forger. During the 50’s and 60’s he specialised mainly in the fauves ; Matisse, Dufy ect… Fernand Legros was an illegal immigrant from Egypt and a ballet dancer , who with his lover Canadian backpacker Real Lessard sold de Hory’s forgeries to some of the biggest art museums and most of the biggest art collectors in Europe and the U.S. During the 1960s, they proved the fine art world was as brand gullible as any bunch of teenage girls in any suburban shopping mall.

In 1820, Gregor MacGregor made up a fake country called the Republic of Poyais. He opened offices in Edinburgh, Glasgow and London where he sold Poyais real estate and exchanged money for the Poyais dollars his mate printed for him. After months in a boat doing laps of Central America, the few Poyais investors who had survived realised there was no Poyais but refused to accept they’d been duped.

This is Fernand Legros, so desperate for money and so contemptuos of his art buyers he often couldn’t wait for his fake Matisse’s, Duffy’s ect…to completely dry before he showed/selled them to his clients. Here he sells his art to backpackers off a clothes line with one of his young men/boy assistants who he always dressed in expensive suits. To his right is one of the partys he threw with fake celebrities – european royalty.

Here nuns sell fake holy relics in front of their cardboard church. The nuns sell milk from the Virgin Mary with two cows suspiciously grazing behind them along with a Matisse painting by naked women trying to selfie themselves while struggling to include all their fake handbags. The scene is made credible by the velvet rope surrounding it, which is rolled out like electric cable by workmen.

People in Poyais weren’t interested in the painting – just the brand so they showed of their art collection by hanging them on the outside of their houses. To make the crude seem classy, opening champagne arrives in wheelbarrows.