TERRORIST IN A CAKE SHOP 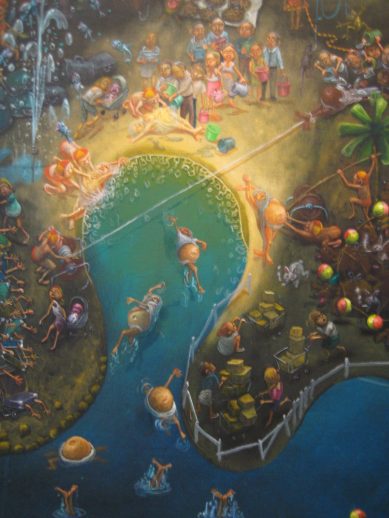 Before there was a terrorist in a cake shop Australians feared that eventually the unlucky people from the unlucky countries would come and bring their wars, their hunger , their poverty and their queues. A plague of experimented on rabbits; Indian dancing bears , tortured TV animals, baby drowning muslim mothers and card box living Phillipinos can’t be held out much longer by the shark net that surrounds Australia’s waters and the handful of lifesavers that surround Australia’s beaches . 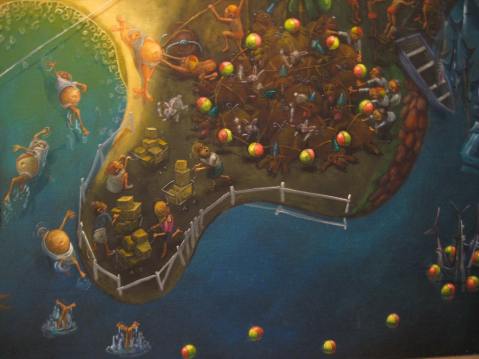 In Australia people are so afraid of the water that they make bridges that go in circles and on those bridges people drag their yachts along the roads, they pile their sealess yachts on top of each other to make luxury seaside apartments looking out on the water they will not sail on.

Before there was a terrorist in a cake shop Australian’s favourite pastime was to tell each other how lucky they are compared to other countries. They hold big raffles where the first prizes are ; the ability to have children, running water, or a free and healthy press. Everybody has a ticket but nobody can tell you where you can’t have a child or turn on a tap and Melbourne has two newspapers and one of them is the Herald Sun. It’s like an old T.V. commercial for Gumbaya Park where you could go to play chasey or do push ups or play totem tennis providing you bring your own totem tennis pole.

Like most criminals and lottery winners Australians have a semi-conscious guilt that they are taking more from the world that they are worth. Rituals that dress up dress up the rest of the world as corrupt are important to us ; Muslims dressed as baby drowners, dolphins dressed as sharks, seventh day Adventists as baby sacrificers , Sudanese kids as the apex gang ect…

Australians are simultaneously bonded and excited by their fear of their coming bad luck , they go to Lunar Park and stand in two buckets of water and are encircled by a carousel of dolphins wearing fake shark teeth and tied on shark fins. After that they can relax in their second favourite pastime – shouting things out of the windows speeding cars at minorities walking on the footpath.

Amongst all the fossil fuels, beautiful beaches , blue skies and all those sheep and suntans Australians can’t fully enjoy their luck – like children held hostage in a chocolate shop.