In the South Pole the explorers were so afraid of not having enough food for winter that they starved to death in summer, 2001-2, oil and glitter on linen, polyptych 74 x 100 inches overall.

Polar explorers, including the famous competitors, Scott and Amundsden, would camp on the coast, and then set out on dog-powered sleds to the South Pole in spring. Many of the explorers were so terrified of being stranded inland during the Antarctic winter that they would not eat their supplies during the summer and consequently starved to death with a sled full of food. Other explorers were so aware that they depended on their dogs’ health to guarantee their return that they gave their own share of food to their dogs. Many starved and skeletal explorers were pulled by overfed, fat dogs. The South Pole from 1910 to 1920 was covered with dog shit and dead explorers.

For these polar explorers, at first summer was their favorite season, but they could not enjoy it because they knew it was all down hill from there; so spring became their favorite because it was leading up to summer. But summer had become their least favorite season so winter became their favorite because all the good seasons were to come. Although it was cold and miserable, at least they could look forward to improvement. These explorers felt it was better to always be suffering with the hope of things getting better than comfortable with the fear of things getting worse .This story is about people who use unhappiness as insurance against disappointment.

The panel on the left is of the explorer, Scott, as a young man already displaying signs of his compulsive behaviour by showing his envious sisters his uneaten Easter egg in July, though now it has turned powdery, white, flyblown and thoroughly inedible. A snowflake which has drifted across from the snowy central panel to summer, magnifies this detail. and tearfully covering his new schoolbooks on Christmas day.

The middle panel shows the South Pole, a mountain of frozen dog shit, surrounded by flags that didn’t quite make it. Young women endlessly exercise on their sleigh pulled by old fat ladies, the misery from fear of aging making the adjustment to old age more bearable and even a relief. Explorers are driven on sleighs pulled by their fears of the future. Cows, whose udders are bursting with milk, drag the coffins of their children to the pole.The final destination – the pole itself – is a flyblown mountain of dog shit, a result of misspent resources and excess energies of polar expedition.

The right hand panel shows the explorers’ funeral and finally the meeting of an older Scott and Amundsden in the frozen section of the supermarket in heaven. In the background are plump sleigh dogs that Scott would not eat to save himself. As in the race to the pole, Amundsen has arrived first. He has all the memories of his journey captured in the shiny mirrors of blocks of melting ice.

In the top panel, the cast of the story takes a bow to the applause of the seals and bouquets of frozen fish. 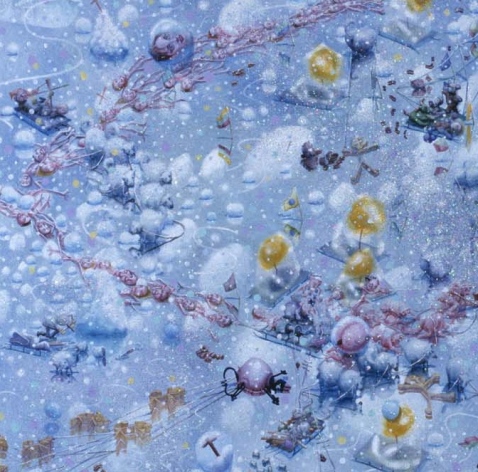 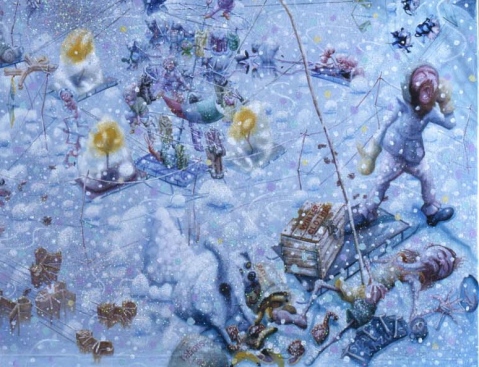 Detail 3. Hayes often uses photos to assist in capturing expressions and gestures. The young Scott here is based on a photo of the artist himself as a young child. The ballerinas are friends, and his sister, from different photographs of them as youngsters at ballet performances.